Latin singer-songwriter Sharin hit the LA stage for the first time on Tuesday night, lighting up The Mint with her irresistible charm and heartwarming music. 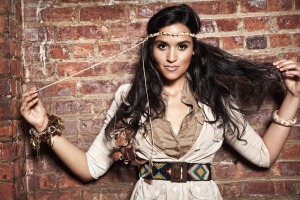 Sharin, who moved to LA less than a year ago, has lived all over the country, starting in Tampa, FL, where she was born and raised and first fell in love with music. By the age of 9, she was composing her own pieces using a variety of instruments. The Berklee graduate brought an acoustic guitar with her to the stage for this performance, a show that was originally meant to be a full band experience, but due to unforeseen circumstances, became a one-woman presentation.

Sharin handled the situation with grace and sang her original music in not one, but three languages during her set at The Mint. From her opening number “Over You” to her Spanish hit “Sin Ti” to the Portuguese rendition of the title track of her newly released EP “Quiero”, Sharin was able to captivate the audience regardless of the language in which she sang. This ability to draw in a primarily English-speaking audience reflects on her unique capabilities as a songwriter and as a performer.

When watching Sharin, it is evident that her love for music runs deep, and has been influenced by the ups and downs she has experienced in her life. From attending one of the most rigorous musical programs in the world to battling stage 4 Non Hodgkins Lymphoma cancer, Sharin has landed in LA with the determination to share her love for life and music with the world. We wish her all the best in doing so.

To learn more about Sharin and to hear her newly released EP “Quiero”, head to www.sharinmusic.com.

Drea Dorman is a singer-songwriter and music enthusiast living in Los Angeles, CA. Learn more about Drea and her music at www.dreaofficialmusic.com.